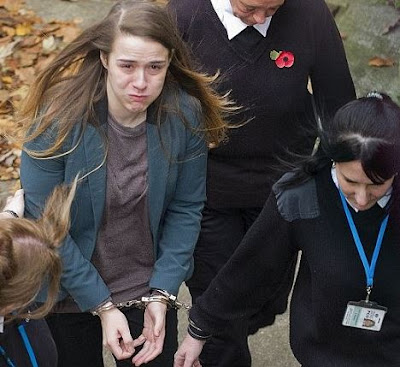 A fantasist who duped a woman into believing she was a man before repeatedly having sex with her using a prosthetic penis was jailed for eight years today.

Mailonline reports that ,Marketing manager Gayle Newland, 25,screamed to her parents 'I'm scared' as she was dragged out of Chester Crown Court .She disguised her true gender from her victim by flattening her breasts with strong tape, deepening her voice and insisting she wore a blindfold when together.

They had sex 10 times until the complainant ripped off her mask and saw Newland's prosthetic penis. Newland told police her accuser, also 25, always knew she was pretending to be a man and it was part of a sex game as they struggled with being lesbians. But the 'manipulative' marketing manager from Willaston, Cheshire, was found guilty of three counts of sexual assault. In a statement read to the court today the victim, who met her on Facebook, said Newland had 'poisoned her life' and taken her 'youth and vitality.'

The victim told the jury 'Kye' asked her to wear a blindfold because he was insecure about his looks after life-saving brain surgery.

They spent more than 100 hours together but she would always cover her eyes when they watched television together and on one occasion when sunbathing 'because I was desperate to be loved', she said.