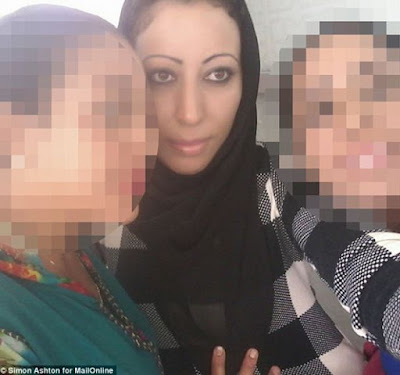 Hasna Ait Boulachen was originally accused of being a fanatical Islamic State operative with an explosive vest strapped to her body.She was also thought to have blown herself up alongside the organiser of the Paris attacks ,her cousin.

But now,Paris prosecutors have now revealed her head was in fact blown off when a third man standing next to her in the St Denis flat blew himself up on Wednesday morning.
According to AFP, during Wednesday's dawn raid in the northern Paris suburb of Saint-Denis, she was heard screaming a response to a member of the crack police team hunting for Abdelhamid Abaaoud..

"Where's your friend, where is he?" the officer is heard shouting on a clip filmed by local residents. "He's not my friend!," a high-pitched voice screams back.

Several loud explosions are then heard in what is thought to be a suicide bomber detonating an explosives vest.

It was widely reported to have been Aitboulahcen, but a police source said Friday she did not blow herself up, adding that the suicide bomber was instead thought to have been a second man.

Speaking to AFP on Thursday, those close to her said they immediately recognised her voice from the recording.
This raises the prospect that Ait Boulahcen was trying to give herself up – and may even have been a hostage – when she was caught in the crossfire,Asked to explain the U-turn further tonight, the Paris prosecutor Francois Molins said:
"All I can tell you is that the kamikaze was not Hasna.