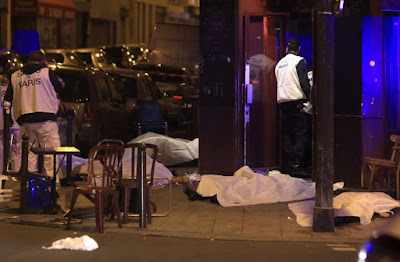 After the horrific coordinated attacks which killed innocent civilians in Paris last night,ISIS has claimed responsibility for gunfire and blasts that targeted six sites in Paris, killing 128 people.

The statement, published in both Arabic and French, threatened further attacks against France “as long as it continues its Crusader campaign.”It said France was guilty of “striking Muslims in the caliphate with their aircraft.”
In addition to the people killed, 180 others were injured, according to the Paris Police Prefecture. More than half of them are in critical condition.

President Francois Hollande blamed the attack on ISIS, calling it "an act of war" by the militants. He said it was planned from the outside -- "with inside complicity."

"When the terrorists are capable of doing such acts, they must know that they will face a France very determined," he said.