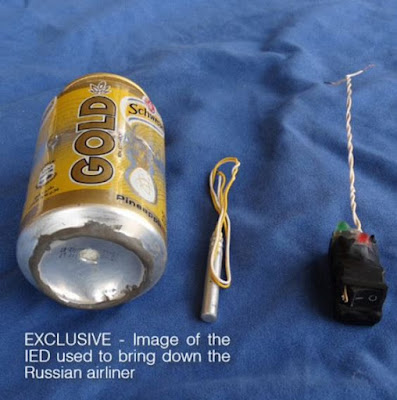 The Islamic State group has released a photo of the bomb it says was used to bring down a Russian passenger plane in Egypt's Sinai Peninsula last month, killing all 224 people on board.

The picture was published in the latest issue of the extremist group's English-language magazine, with the caption "EXCLUSIVE - Image of the IED used to bring down the Russian airliner."

The picture showed a yellow can of Schweppes Gold soda and what appeared to be other bomb components. They wrote

"On 30 September 2015, after years of supporting the Nusayrī tāghūt in the war against the Muslims of Shām, Russia decided to participate directly with its own air force in the war.
It was a rash decision of arrogance from Russia, as if it held that its wars against the Muslims of al-Qawqāz were not enough offence. And so after having discovered a way to compromise the security at the Sharm el-Sheikh International Airport and resolving to bring down a plane belonging to a nation in the American-led Western coalition against the Islamic State, the target was changed to a Russian plane.A bomb was smuggled onto the airplane, leading to the deaths of 219 Russians and 5 other crusaders only a month after Russia’s thoughtless decision."

Russia's FSB security service said Tuesday that a bomb brought down the plane. Most of those onboard were Russian tourists.