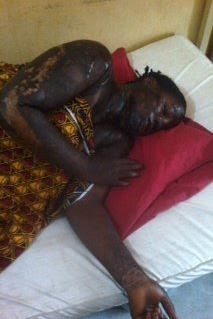 27 -year old Ladi Moses lost her life after she was allegedly bathed with acid by her supposed angry boy friend who was overwhelmed by jealousy and envy.

An ex-student of Government Secondary School, Barkin Ladi, Plateau State, Ladi met her untimely death after the deadly attack a few days ago

Vanguard Metro, VM gathered from an eyewitness that the deceased was attacked by a young man popularly called “Baba” at the old Nigeria Prison Service Yard in the Wadata area of Makurdi town where she lived with her parents until her death.

According to the source, the duo had been in secret romance over a period of time until the relationship went sour. The source explained that the love birds had carried on despite accusations and counter accusations of infidelity by both parties.

However, efforts were made by friends to resolve their differences when it became obvious that the said Baba was getting desperate and restive about the crisis, yielded no positive results.

“Actually we thought that they had resolved their differences until the unfortunate incident that led to the death of Ladi which no one envisaged.

“From what we heard, on that fateful day, Baba called her out of the house around 7pm in the guise that he wanted to discuss an important issue not knowing that disaster awaited her. Unfortunately when the lady approached him, he engaged her in a heated argument which led to a struggle between them. We heard that it was in the heat of the quarrel that Baba removed a bottle containing a chemical suspected to be acid, from his pocket and poured the contents on the lady who instantly screamed and fell to the ground,” “He (Baba) immediately fled the scene and left the lady who was screaming and wailing for help. The passers-by who were unaware of what was happening, ran for their lives because we all know that Wadata is an area in Makurdi town that is known for cult activities. It was neighbours who heard her cry, that rushed to the scene to see what was happening. But before their arrival, Baba had fled and disappeared from the area. She was immediately rushed to the nearby Makurdi Federal Medical Centre where she was admitted for treatment. But after a while, went into coma and eventually passed on.

The source told VM that when the unfortunate incident filtered into town, the vigilante group in the area mounted a search for Baba

“He was eventually arrested at one of the motor parks in town when he was about boarding a taxi out of Makurdi town. The vigilante group arrested and handed him over to the police at ‘A’ Division, Wadata, where he was detained to enable the Police carry out their investigations and interrogation,” he added

According to the source, Ladi did not survive the first degree burns as she died two days after her admission in the hospital, inspite of efforts by the medical personnel to save her life.When Vanguard Metro visited the home of the deceased, her heart -broken parents were still in shock and unable to speak on the incident.