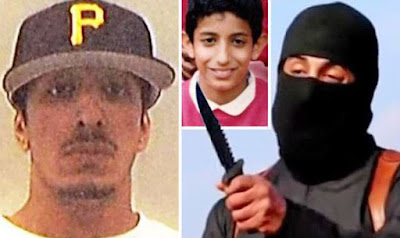 The ISIS terrorist dubbed "Jihadi John", who oversaw the brutal executions of American and Western hostages, was hit by a U.S. air strike Thursday night and is believed to have been killed, U.S. officials told ABC News.

One official said the jihadist, Mohammed Emwazi, was thought to be hit as he left a building in Raqqa, Syria, and entered a vehicle. The official called it a "flawless" and “clean hit” with no collateral damage and that Emwazi basically "evaporated."

"Emwazi, a British citizen, participated in the videos showing the murders of U.S. journalists Steven Sotloff and James Foley, U.S. aid worker Abdul-Rahman Kassig, British aid workers David Haines and Alan Henning, Japanese journalist Kenji Goto, and a number of other hostages," Cook said. "We are assessing the results of tonight's operation and will provide additional information as and where appropriate."

"This huge effort to go after the this deranged man filled with hate when they can't make half that effort to save the hostages while these young Americans were still alive," said Foley, who was been critical of the U.S. government's hostage policy.

Richard Clarke, a former counter-terrorism advisor to the White House and current ABC News consultant, said, "Since ISIS has used propaganda and its 'winner' image to lure new adherents, when its propaganda figure is killed that makes it look more like a loser, more like the tide may be turning against it."

After Emwazi was unmasked and identified in media reports in February, he ceased to appear in videos for ISIS.