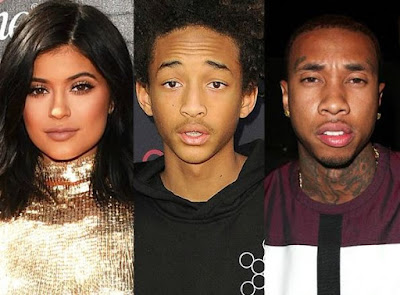 Kylie and Tyga's breakup might be related to Kylie's longtime friend and former rumored boyfriend, Jaden.According to E News!

"Kylie and Jaden have been hanging out lately and it made Tyga suspicious. He thought something might be going on. So that was one issue," one source tells us, however, another insider insists that's not the case.

"She has a close relationship with Jaden since they were very young but nothing romantic has happened with them since she has been with Tyga. Jaden though will always love Kylie and Kylie will always have a love for Jaden. They grew up together and were each others' first loves"

Tyga was already thinking ahead with the relationship, and wanted to put a ring on it at one point. Well, Kylie wasn't on the same page. "He's just ready to settle down and she's not," a source tells E! News.

"Kylie wants to not be with anyone now. She wants to focus on her. Tyga is ready for marriage and would be ready to seal the deal with Kylie. Kylie wants to go out with her friends and just have a bit of fun.

"She has many guy friends but nothing romantic has happen with any of them. She never cheated on Tyga. Anything is possible in the future but as of now Kylie is just going to be focusing on herself."