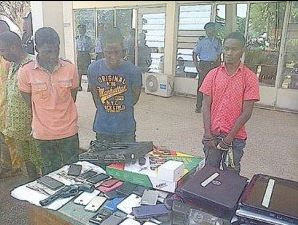 When students of Ladoke Akintola University of Technology, Ogbomoso stormed major roads in the city to protest continued robbery attacks on their female hostel and raping the helpless ladies, they did not in their wildest dreams think that the said robbers could be among them.

The state Police Command recorded a breakthrough as they arrested three suspects who were alleged to have been involved in the ungodly act. While parading the suspects alongside other suspects, the Commissioner of Police, Mr. Leye Oyebade said,

“ a 400L male student of the Department of Transport, Ladoke Akintola University of Technology, Ogbomoso who belonged to a notorious criminal gang nicknamed ‘Three Mopols’ was arrested on 3rd November, 2015 in his criminal hideout by the special anti robbery squad in Oyo/Ogbomoso. “
The gang, according to him, was responsible for breaking into students hostels,stealing valuable property and sometimes raping their female colleagues.

His arrest and subsequent confession led to the arrest of two criminal receivers – Adeyemi Samuel Taiwo and Adeyemi Samson Kehinde who received some of the stolen items.

When asked what led him into that shameful act, the suspect confessed that it was true he was involved in the constant raids but tried to exonerate his accomplices saying they were not among the gang but that they always bought the stolen goods from him.