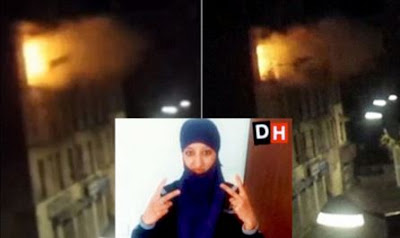 This was the moment Hasna Ait Boulahcen, 26, detonated a suicide vest as French police raided the house where Paris attack mastermind, Abdelhamid Abaaoud was hiding, on Wednesday morning. The force of the explosion was said to have sent her head flying out the window, with her spine reportedly ending up on top of a police car.