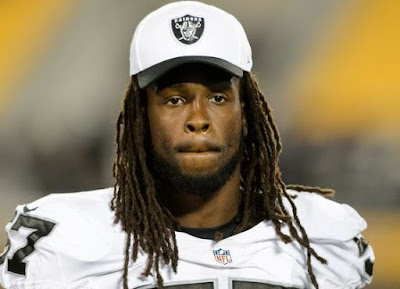 An American football star is facing seven years in prison after he allegedly barked at a police dog and pounded his chest.

Oakland Raiders Ray-Ray Armstrong has been accused of taunting the animal as he lifted his shirt before the start of Sunday’s game at the Pittsburgh Steelers.

Chief Deputy Kevin Kraus said the incident happened between the player leaving the changing room and heading on to the field to warm up before the game.


He said his deputy who was holding the dog said Armstrong told her to "send the dog."
"The dog was going crazy,"The deputy was trying to control the dog the best she could.

“We were immediately notified about the incident, and we immediately initiated a criminal investigation into the matter.”

She said the Armstrong was shouting

"Hey dog, hey dog" as he taunted the animal"Bandit was very agitated,” she said.

“He wanted me to let him go. I imagine with his training and experience he would have gone to his target who was taunting him.

“I don't want to speculate on what he would have done," she said.

The Allegheny County Sheriff's Office are looking at possibly charging the 26-year-old with a third degree felony. If found guilty he could face up to seven years in prison and a maximum $15,000 fine.