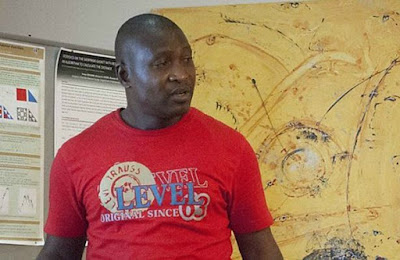 Has the the Riemann Hypothesis – perhaps math’s most famous problem, which gone unsolved for 156 years – finally been cracked?

Academic Dr Opeyemi Enoch, above, from the Federal University of Oye Ekiti (FUOYE) in Nigeria, says he was persuaded by his students to tackle it.

The hypothesis, which was proposed by mathematician Bernard Riemann in 1859, concerns the distribution of prime numbers.

It one of seven Millennium Problems in Mathematics, puzzles chosen by The Clay Mathematics Institute that carries a prize of £658,000 if solved.

But Enoch, who claims to have made the breakthrough in 2010, says it was the challenge itself, not the money, that made him devote his time to it.

“The motivation was because my students trusted that the solution could come from me – not because the financial reward and that was why I started trying to solve the problem in the first place,” he told the BBC.

The Riemann Hypothesis (State and University Library at Göttingen)

“Dr Enoch first investigated and then established the claims of Riemann,” said a statement from FUOYE.

“He went on to consider and to correct the misconceptions that were communicated by mathematicians in the past generations, thus paving way for his solutions and proofs to be established.

"He also showed how other problems of this kind can be formulated and obtained the matrix that Hilbert and Poly predicted will give these undiscovered solutions. He revealed how these solutions are applicable in cryptography, quantum information science and in quantum computers.”

However, the professor revealed that he has faced some bizarre criticism: “[Some people asked] if this man can solve the Riemann problem…why should he not be able to provide solutions to Nigeria’s problems?“ Dr Enoch said.

“Some guys celebrated it, some criticised it – saying what has that got to do with putting food on the tables of Nigerians.”

The Clay Mathematics Institute is yet to confirm that the problem has been solved.