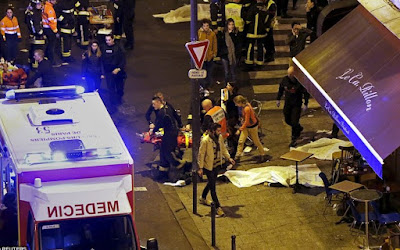 The first Jihadi suicide bomber named in connection with the Paris terrorist attacks that left at least 129 people dead is Omar Ismail Mostefai, who was identified by his finger.

The digit was found among the carnage of the Bataclan concert hall, where the 29-year-old was one of three men who blew himself up, killing 89 men, women and children.

Born on 21 November 1985, in the Paris suburb of Courcouronnes, Mostefai’s criminal record shows eight convictions for petty crimes between 2004 and 2010.

Although he had never spent any time in jail, Paris prosecutor Francois Molins said Mostefai had been picked out as a high-priority target for radicalisation in 2010.
But before Friday, Mostefai had ‘never been implicated in an investigation or a terrorist association'.

Investigators are now investigating claims that he went to Syria last year, and may have spent time with IS terrorists.

Mostefai's father and 34-year-old brother were arrested on Saturday night and their homes were searched.

'It’s a crazy thing, it’s madness,' his brother told French news agency AFP before he was taken into custody.'Yesterday I was in Paris and I saw how this s*** went down.'

The brother, one of four boys in the family along with two sisters, turned himself in to police after learning Mostefai was involved in the attacks.

While he had cut ties with Mostefai several years ago, and knew he had been involved in petty crimes, his brother said he had never imagined his brother could be radicalized.
The last he knew, Mostefai had gone to Algeria with his family and his “little girl”, the brother said, adding:
'It’s been a time since I have had any news.I called my mother, she didn’t seem to know anything.’
A source close to the inquiry said Mostefai regularly attended the mosque in Luce, close to Chartres, to the southwest of Paris.

Two of the suicide bombers who caused carnage in the Paris massacre are thought to have sneaked into France by posing as refugees from Syria, it was revealed Saturday.
Police said the two men, who arrived in Greece last month, were among seven attackers, one as young as 15 years old.

Serbian media last night reported that one of the terrorists was named as Ahmed Almuhamed. The newspaper said that 25-year-old Almuhamed arrived in Europe on the Greek island of Leros on October 3 on his way to Paris.