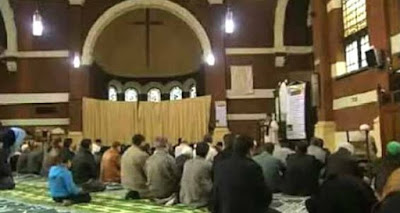 In an effort to consolidate on the existing peace between Muslims and Christians in Kaduna, groups of Muslims and their leaders on Sunday attended a church service in Kaduna.

Prominent among the over one hundred Muslims that attended the church services to celebrate the seventh anniversary of Christ Evangelical and Intercessory Fellowship Ministry were the Shi’te, Izala and others.

Speaking while delivering his sermon at the anniversary service, General Overseer of Christ
Evangelical Intercessory Fellowship Ministry, Pastor Yohanna Buru, said the physical presence of Muslims from different sects in the church was a clear evidence that the hatred and acrimony that hitherto had caused division between Christians and Muslims is gradually giving way for a peaceful coexistence.

He also said the motive behind the church inviting the various Muslim groups to join the church to celebrate its anniversary is to help strengthen religious tolerance and promote peace between adherents of both Islam and Christian religions in Kaduna and Nigeria.

According to Pastor Buru, it is only when Muslims attend Christian services to witness Christian way of worship that they can truly appreciate that both religions preach peace and love.
“The Bible teaches Christians to love their neighbours and that is what we have done today,” he stressed.
One of the Muslims, Mohammed Isa who attended the three-hour service held at Gbagyi Villa, Sabon-Tasha, Kaduna, told P.M.NEWS that attending a church service to celebrate with Christians has exposed him and his other Muslim brothers to understanding that there is no reason for fighting and killing one another over religious difference.

He therefore urged Christians across the country to do same by emulating the Muslims.