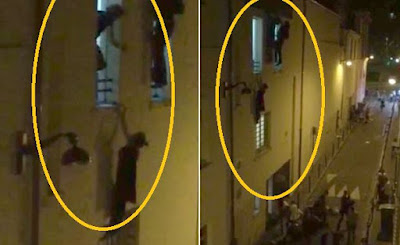 A terrified pregnant woman trying to flee the Paris bloodbath hung from a window ledge high above the ground, pleading for help.

The unidentified mum-to-be was one of hundreds in the Bataclan theatre as the slaughter took place on Friday night.

She was heard to shout:

“Help, help I’m pregnant, I’m pregnant. What shall I do?”
Later she was rescued and is believed to have survived.

And it was revealed that the terrorists even sprayed bullets at helpless people sitting in wheelchairs.

“They went into the back room where there were people in wheelchairs.They just started shooting them and every time anybody tried to get out a guy would come out and start shooting again.”