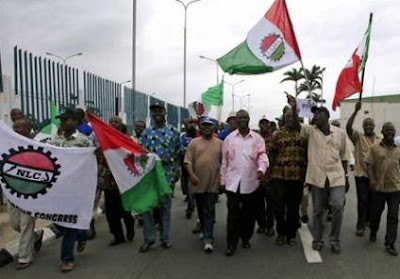 Following comments by state governors that they can not afford to keep paying the 18,000 minimum wage ,the Nigeria Labour Congress, NLC, yesterday warned that attempts by the governors through the Governors’ Forum to renege on the N18,000 national minimum wage was an open declaration of war against the Nigerian workers.

NLC, in a statement by its factional President, Mr. Ayuba Wabba, told the governors to prepare for war and organised labour would have no alternative than to mobilize to respond appropriately to this act of aggression by the political class on workers’ welfare.The statement read in part:

“The Nigeria Labour Congress is shocked by the statement credited to the chairman of the Governors Forum, Governor Abdulaziz Yari, that the N18,000 national minimum wage promulgated into law in 2011 was no longer sustainable because of the fall in the price of crude oil. The governor, who was speaking on behalf of his colleagues at the end of a meeting of the forum, also claimed that the national minimum wage was ‘imposed’.

“We wish to make it abundantly clear that this attempt to reverse the national minimum wage is a declaration of war against the working people of this country, and we would have no alternative than to mobilize to respond to this act of aggression by the political class on our welfare.

“For us in the Nigeria Labour Congress, we know as a fact that ability to pay minimum wages is not the problem of the economy. What is the problem for states and other tiers of government is the amount many political office holders and their unproductive aides take away as wages. For the private sector, the greed to accumulate more and more profit is also always a motivating factor to keep wages down.