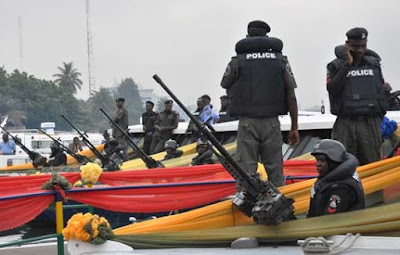 Armed robbers on Sunday stormed the Marine Police Post of the Lagos State Police Command in the Epe area, exchanging gunfire with the policemen.

During the attack, the robbers attempted to steal the station’s gunboat and other ammunition.

Punch learnt that the robbers, said to number about 20, came in a speedboat to the Marine beach at about 12.30am.

A police source said that the robbers, who escaped in their boat, riddled the station with bullets. The gunboat, which they attempted to steal, sank in the water.He said,

“It was at about 12am that the militants invaded the Marine Police Post, Epe. Their mission was to kill the policemen and dismantle the security structures around the place so that they could embark on a bank robbery maybe on Monday.
“The gunfire lasted for several minutes, and the whole area was riddled with bullets. Eventually, they succeeded in sinking the gunboat. No policeman was killed but some might have been injured by the bullets.”

Our correspondent learnt that the state Commissioner of Police, Fatai Owoseni, went to the station on Sunday and assessed the damage.

The Police Public Relations Officer, DSP Joe Offor, who confirmed the attack, said the CP had directed that the area be electrified and the gunboat replaced.

The Epe Divisional Police Officer, the Rapid Response Squad and the CTU repelled the gunmen. The CP visited the place and ordered that the beach be electrified.

“The area commander, the DPO and other officers have made efforts to recover the gunboat. We are still working on it and we have fortified the area. Banks have been asked to go on with their usual activities, and there is no cause for alarm.

“No arrests have been made so far. Efforts are on to replace the gunboat.”