Robbers force LAUTECH students to have sex with one another 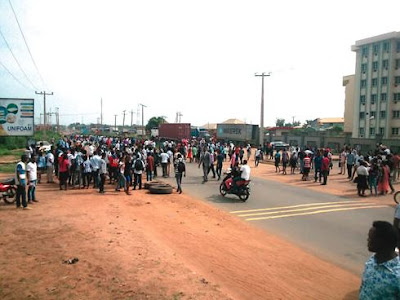 A student of Ladoke Akintola University of Technology, Ogbomoso, Oyo State has narrated how robbers invaded their hostel,raping them and forcing them to have sex with each other..In tears, Bimbola (not real name) agreed to narrate her ordeal to a Punch correspondent last Monday.

What she passed through in August was painful, unimaginable and dehumanising. In fact, she might not be able to forget that night in her life.Ever since the incident, everything about her has changed, according to her friend.

In the night of August 13, 2015 – around 12 midnight – she said she and her roommate had returned from a night reading class in preparation for their forthcoming exam in November, locked their room and were about to sleep when they heard their hostel mates jamming their doors, screaming and walking up the hostel stairs.

Before they knew what was happening, the men were at their door and expectedly, they forced the door open.

“Come out now or we will kill you,” she recalled what the men told her and her roommate, and with fear and trembling, the girls did their bidding.

Three hefty fearful-looking men, clad in black polos and jeans, armed with guns, machetes and axes had stormed their hostel – located in the Under G Area of Ladoke Akintola University of Technology, Ogbomoso, Oyo State – and demanded that all the students, both male and female, should gather in one room.

While one of the hoodlums stayed with the students, pointing guns at them should they ‘misbehave,’ the other two locked the entrance to the hostel, ransacked all rooms one after the other, stole the students’ laptops, money, debit cards, tablets and mobile phones.

But even after stealing all their property, the robbers were not done. The next command they gave the students was what Bimbola has not yet got over with.

“They raped some girls in our presence, but not only that, they asked us to start having sex with ourselves. They called from among us a guy and a girl and asked them to have sex with themselves, right in everybody’s presence. They threatened to use their weapons on us if we didn’t cooperate. Then they asked all of us to strip naked. Since it was in the night, most of us ladies already had only our night gowns on, while most of the guys were just putting on boxers. They said we should all be naked. When they were satisfied, they called another pair of students to do the same thing and told everybody to watch.

“For about three hours, they dehumanised us, humiliated us. Unfortunately, nobody in the next hostel knew what was going on; if anyone knew, they would have helped us to call the police or the Student Union Government officials.”

But what was more pathetic about Bimbola’s story was that she didn’t just witness the whole action; she was also asked to have sex with a guy she never dated.

“Everything happened like it was a dream. They pointed at a guy I knew as my junior and asked him to do ‘it’ with me. When I refused, they slapped me and I fell. I had no option than to do it. I looked at my roommate and she was already shedding tears for me. How humiliated I was!” she cried.

She further told our correspondent,

“It was not a night to remember. I wish I could erase it from my memory. My friend and I returned to the hostel that night after reading in the school because our exam is fast approaching. If I knew something like that would happen, I would have stayed in the school till the morning, but I needed to prepare for the following day’s work. I had just finished having a shower when my roommate and I observed something was wrong. There was no light, so we couldn’t see properly, but we observed that our hostel mates were all jamming their doors at some men’s command.

“They cramped all of us in one of the rooms upstairs and we were all frightened. My parents are not yet aware of this incident and I don’t wish to share it with anyone again. I only agreed to speak to you because my friend here encouraged me to and I feel something should be done by the authorities concerned to stop this barbarism. I know I’ll be fine soon.”

Since July when they resumed for the semester, the students of LAUTECH have been witnessing robbery attacks and rape by the same set of unknown men – who call themselves ‘Three MOPOLs’ each time they barge into their victims’ hostels.

The Welfare Officer of the Student Union Government of the institution, Ridwan Okedara, said he could not count the number of calls he had received ever since the incident started occurring in July up till about two weeks ago. He said it was unfortunate that the hoodlums had yet to be apprehended.

“I’ve received calls in the past four months almost every passing night about this incident. Victims and eyewitnesses usually say the robbers were always three and they would tell them they were the ‘Three MOPOLS,’ but we are not sure if they are not even more than that. For instance, there were some nights when I received calls that the robbers were operating in the Adenike Area (a popular students’ residential area near the school) and I would quickly call our security officers to go to the said hostel, but few minutes later, I would receive a call that they were operating somewhere else.

“Before the security people could get there, the robbers would have left and we would hear they had started operating somewhere else. We don’t know their tactics yet. From what we have heard from eyewitnesses, they would enter a hostel, pretend as if they were looking for somebody and before the students knew it, they would threaten them with guns and machetes and ask all of them to be inside one particular room after collecting their phones, laptops and money. They ask the students to strip off their clothes – both male and female, then ask them to start having sex with themselves. They could call a male from say 200 Level and ask him to have sex with say a 400 Level female student.

“These robbers rape our students and then ask the students to have sex with themselves. We’ve heard a case when the robbers used white handkerchiefs to wipe the private parts of the students after the act. We are also suspecting ritualism here. They go to hostels anytime from 8pm to 1am and from eyewitnesses’ accounts, there was usually no light anytime the hoodlums carried out their operation.”

The other victim who spoke with our correspondent said,

“It was very dark and there was no light to see their faces when they came to our hostel. They told us they were the ‘Three MOPOLS,’ and mere looking at them, we could not imagine how they were able to gain entry into our hostel and ordering all of us to go inside one room. We were told to take off our clothes and they raped some of the girls. They didn’t rape me and they didn’t ask me to have sex with anyone, but they stole my laptop and phone. It was traumatic. It was like experiencing hell that night.”