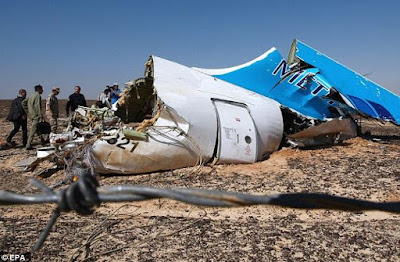 After lots of speculation,Russian security services have admitted that they have found traces of explosives on a passenger jet which was blown up over Egypt's Sinai peninsula killing all 224 people on board.

The flight A321 disappeared 23 minutes after leaving Sharm el-Sheikh airport en-route to St Petersburg. ISIS claimed responsibility for the attack.

Alexander Bortnikov, head of the FSB security agency told Russian President Vladimir Putin: 'One can say unambiguously that it was a terror act.'Russian experts determined the blast was caused by a bomb with the equivalent of a kilo of TNT.