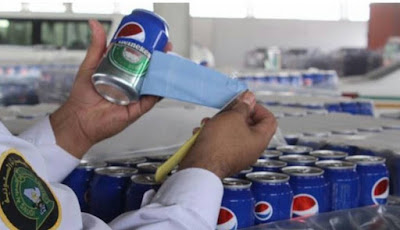 Have you ever been caught trying to sneak a beer into a concert or movie theater? Well, if you have ever been “that guy,” remember the feeling of dread that coursed into your stomach as you heard someone growl out from the crowd, “Hey, You! What is that?!? You aren’t allowed to have that in here!” As inconvenient as that experience probably was, you were — at most — asked to leave the venue. You more than likely only had to dump out your beverage. Now envision the anxiety you felt in that moment amplified by 48,000 as you conceptualize trying to sneak into a country that has beheaded at least 151 people this year.

A smuggler crossing into Saudi Arabia from the United Arab Emirates was recently apprehended while attempting to discreetly move 48,000 cans of Heineken beer, disguised as Pepsi, into the Islamic nation.
Although degrees of punishment vary depending on who committs the offense, it is against the law to possess alcohol in Kingdom of Saudi Arabia. Customs officers at the Al Batha border crossing intercepted the forbidden contraband, according to LBC America.

“A truck carrying what first seemed to be normal cans of the soft drink Pepsi was stopped and after the standard process of searching the products, it became clear the alcoholic beer was covered with Pepsi stickers,” Al Batha border General Manager Abdulrahman al-Mahna reportedly said. The officer also stated that despite the development of new, clever methods to smuggle goods across the border, his patrolmen “are always ready and alert to catch.” It is not yet known what punishment the driver of the truck will endure.