T.B. Joshua, Others to Face Prosecution Over Death of 116 Persons in Church Building Collapse 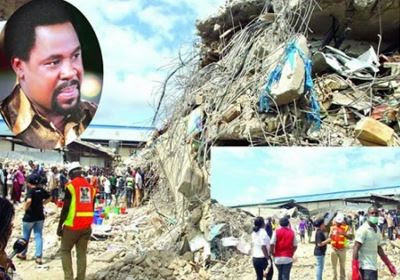 The trustees of ‎Synagogue Church of All Nations (SCOAN) will on Monday (November 30, 2015) be arraigned before a Lagos State High Court in Ikeja over the collapse of a six-story building in the church on September 12, 2014, which led to the death of 116 persons.

The Senior Pastor of the church, Prophet T.B. Joshua who is one of the trustess, will also face arraignment.

According to PremiumTimes, the trustees will be arraigned before Justice Lawal Akapo alongside the engineers who constructed the collapsed building.


A statement by the Deputy Director, Public Affairs of the Lagos State Ministry of Justice, Bola Akingbade, confirmed the scheduled arraignment.

It would be recalled that the church building, a guest house, collapsed in September 2014, killing 116 people, many of them South Africans who travelled to Nigeria for the church’s service in Lagos.