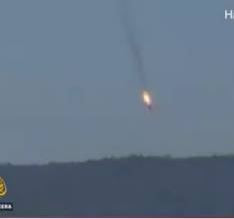 Turkey has shot down a Russian warplane on the Syrian border, a senior Turkish official has said. According to Al Jazeerah, the plane was shut down on Syrian territory in Latakia's Yamadi village.

The plane was downed by the Turkish military according to the rules of engagement because it violated Turkish airspace, the Turkish official said.

The Turkish president's office identified the plane as Russian and said it was warned before being shot down, according to semi-official Anadolou agency.

A Turkish military statement said that the plane violated Turkish air space in the Hatay province and was warned 'ten times in five minutes'. "Our two F-16 planes on air patrol duty intervened in the plane in question on November 24, 2015, 9:24am, according to the rules of engagement," the statement said.

The Russian defence ministry said that an SU-24 fighter jet crashed in Syria as a result of an attack from the ground. "A probe is in progress into the circumstances of the Russian plane crash," the ministry was quoted as saying by the TASS Russian News Agency, adding that the plane had stayed within Syrian airspace. Objective monitoring data confirm this.".