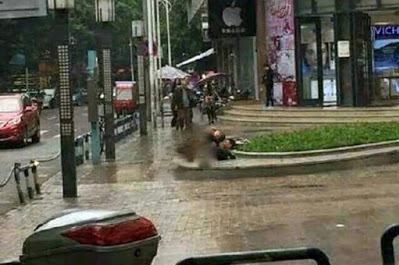 This is simply the hight of mental case or just pretense to drive home a point being that homosexuality was decriminalized in China in 1997 and the government stopped classifying it as a "mental illness" in 2001. However it is still considered widely taboo in the country.

Two Chinese men, believed to be gay were caught by onlookers getting a 'rumpy' in the public at Chongqing. It was shocking and the people could not believe it was real, as the men 'pumped' away without caring about where they where.

The snaps of the act went viral online and local investigators launched an investigation into the shameful act. The two men were identified as Zhou and Liang, who claimed they were mentally sick and could not control their actions.

Chongqing Public Security Bureau said the men will not be charged for their actions based on their claimed mental state.