U17 World Cup: Nigeria to face Mali in the final after beating Mexico 4 - 2 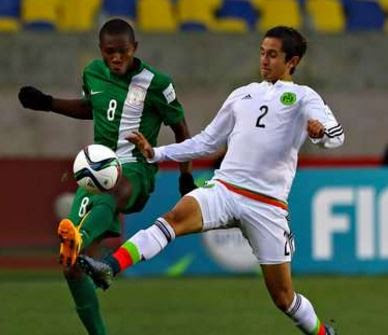 Nigerian forward Osimhen, has now equaled Florent Pongolle and Souleymane Coulibaly’s record of most goals in a U17 World Cup tournament

Nigeria U17 team marched to their eight Fifa U17 World Cup final after surviving the Mexicans scare in a thrilling 4-2 encounter played at the Estadio Municipal Ester Roa, Concepcion on Friday morning.

Two late goals from leading top scorer Victor Osimhen and Osinachi Ebere handed the Golden Eaglets the ticket to battle for the trophy against Mali after Kelechi Nwakali’s free kick and Orji Okonkwo had cancelled out Diego Cortes and Kevin Magana’s goals.


A moment of dismay by Emmanuel Amuneke’s boys cost them a goal in the seventh minute after Kevin Lara delivered a tongue-in-cheek cross into the middle. Aguirre tried to control with his chest, but Magana took charge and fired home.

The early deficit was the tonic the Africans needed to wake up from their slumber as they dominated play with Osimhen coming close twice and Nwakali hitting a low drive from the edge of the Mexican penalty area which was saved by goalkeeper Romero.

Nigeria’s Akpan Udoh was called to duty as he made a point blank save to deny Jose Esquivel from doubling the lead from a close range header.

In the 35th minute, Nwakali leveled up with a curly 25-yard free kick and with less than two minutes to halftime, Amuneke’s wards took the lead for the first time with Okonkwo’s world class goal. He cuts inside from the left onto his right foot and thumped a missile into the net.

On resumption of the second half, El Tri found  their tempo as Cortes stepped up to score a fantastic goal. He picked up the ball on the Mexican right just inside the Nigerian half and proceeded to dribble past five players, showing incredible close control before slotting calmly past Udoh.

Not too long, Ebere gave the Eaglets the lead. His right-footed effort was too strong for Romero, who got a hand to the strike but could not keep it out.

John Lazarus was taken down in the Mexican penalty area, giving Osimhen the chance to score his ninth goal of Chile 2015 and go level at the top of the all-time U-17 World Cup goalscoring charts. He slotted home with ease, adding sheen to the Golden Eaglets victory.

Nigeria face Mali in Vina Del Mar on Sunday for an all-African final against continental champions Mali while Mexico will face off against Belgium in the match for third place.