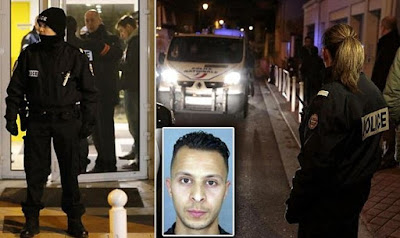 A suicide bomber's explosive belt - containing a volatile chemical nicknamed 'Mother of Satan' for the ease at which it is detonated - was tonight found by police dumped in the southern Paris suburb where terrorist fugitive Salah Abdeslam escaped the city.

The 26-year-old fled the bloodbath that left 130 dead on November 13th, rather than blowing himself up. Tonight's find in a dustbin in Montrouge, in the Hauts-de-Seine department, is hugely significant because it supports the theory that Abdeslam abandoned his mission.

Police said the explosive belt was found in the place where Abdeslam's mobile phone was operating on the day of the Paris attacks.

According to NBC News, a spokesperson for the prosecutors' office confirmed a cell phone had also been found near the belt.

Investigators believe the jihadist gang that carried out eight coordinated attacks planned to strike another target but Abdeslam changed plans at the last minute.

Abdeslam's brother, Brahim Abdeslam, blew himself up in a cafe near the Place de la Nation, but he chose to escape.

Abdeslam is thought to have driven the three Stade de France bombers to the stadium before moving on to the 18th arrondissement.Abdeslam, a French national, infamously hired the vehicles and hotel rooms used in the attacks.The next day he and two accomplices were stopped by a traffic patrol close to the Belgium border but then let go.