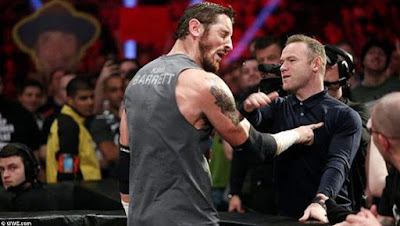 Wayne Rooney decided to relax a little and went for a WWE match in Manchester accompanied by coach Ryan Giggs, former teammate Darren Fletcher and son Kai. Little did the Manchester crowd know they were in for a thrill. After spotting the Man. U captain, Manchester-wrestler Wade Barrett attempted to playfully humiliate Rooney. Wade, 35, goaded him, saying: 'In this ring are two men who can easily be described as championship material. Which is, of course, more than can be said of Wayne Rooney and Manchester United.'

Barrett didn't end there. He now goaded Rooney and his son seated ringside which the England striker apparently couldn't take.

'I'd hate for your little boy to sit there and watch his own father fail. Because let's face it, he gets to experience that every single time you step on a football pitch.'

Wayne Rooney then stood up challenged Barrett to a fight, gesticulating to the wrestler to come down from the ring to which the wrestler responded. Upon reaching Rooney's ringside sit, the Manchester united striker slapped him, all to the amazement of little son Kai Rooney.

The amazed Manchester crowd chanted Rooney's name as the striker's blow left Barrett sprawling on the floor. The incident - true to professional wrestling - was of course scripted and England skipper Rooney 'revelled' his role. 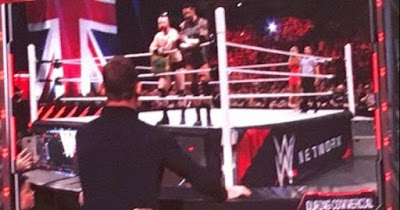 Afterwards, Barrett tweeted: 'I'm heading to Old Trafford early tomorrow morning. I hope @WayneRooney has the guts to meet me there.' He then added: 'Does anyone have Phil Bardsley's phone number?'

A WWE source, speaking to Sportsmail, said: 'It was brilliant. Wayne was in great spirits before the event and he happily agreed to take part in the stunt with Wade Barrett. The fans absolutely loved it and I'm sure his son Kai would have enjoyed it too.' 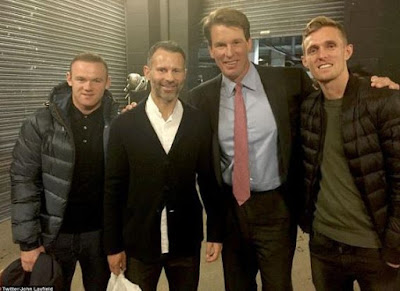 Rooney, of course, is no stranger to 'pretend' fighting after a video of him apparently being knocked out by Phil Bardsley went viral in March