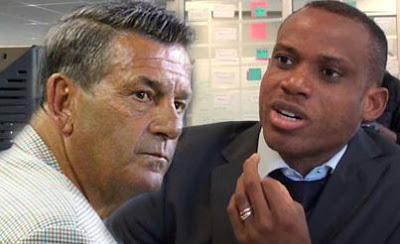 Westerhof, who won the 1994 Africa Cup of Nations title with the Super Eagles in Tunisia, made his stance known after Nigeria beat Swaziland 2-0 on Friday.

Following the victory, Oliseh told the press he was proud of his team, and Westerhof said it was nothing to celebrate.
“Congratulations, you beat Swaziland 2-0 in the return leg match of the preliminary round of the qualifiers,” But does that really call for celebration? Yes, there are no minnows in football but who are Swaziland to hold the Super Eagles to a goalless draw?T

he Super Eagles won 2-0 in Nigeria but is it not a game the Super Eagles should be winning 6-0, 7-0 under normal circumstances? What type of football do they play in Swaziland?

“Swaziland is not the first match Super Eagles have played under Oliseh. There has not been any difference between their first game under him and the game with Swaziland.I’m sorry, with Oliseh, the Super Eagles may not go to the World Cup in Russia,” Westerhof declared.