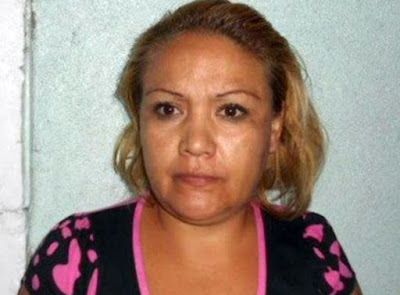 A woman has been arrested after she allegedly lured a pregnant woman to her house before killing her and cutting out her baby.

Nancy Carrasco, 34, had a miscarriage three months before she was due to give birth, but instead of sharing the news with her family, she faked the rest of the pregnancy,Daily Mirror reports.

She even went for medical check-ups at hospital where she met pregnant 23-year-old Luvineydi Yasmin Velazquez Thomas and befriended her.

Once she established the friendship it is claimed the woman was invited to her house in Tijuana, on the Mexican border with the US, where she was killed and the baby cut out.

Wanting to make sure the child was okay, Carrasco admitted herself at the local IMSS birth clinic and claimed the baby was hers, cops say.

However, doctors said she did not have any of the symptoms of a woman who had just given birth, and contacted her family members to go back to her house and bring the placenta.
Once at the house however, her horrified relatives found the body of the woman and alerted the police .

When she was confronted about the body, police say she admitted:
"I took out her baby and I killed her."I stabbed her from behind and strangled her with her own head scarf."Then I used a knife to cut open her stomach and steal her baby."
She said that she had been terrified her husband would leave her if they lost their baby, it is claimed