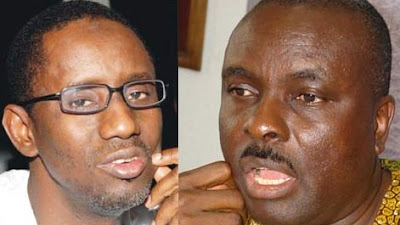 Following claims by Nuhu Ribadu in several publications that he tried to bribe him with $15million to stop an investigation against him,Chief James Ibori has described the claims as horrible, revolting, nasty and totally false.

“As the Senate and some security agencies appear to be asking questions about some unwholesome events at the EFCC, including the mismanagement and criminal diversion of funds from the sale of confiscated properties into personal pockets, Ribadu may have a need to attempt to burnish his fading image, fearing the investigations may ask questions about events during his tenure.
But he should be told that lying, against even an enemy, just to gain some unearned applause and perhaps fence off some approaching investigation and image disaster,must have a limit,”

Ribadu claimed in the news reports:

“Ibori approached me with $15million to stop his investigation. I called my people because the money was in big bags, which two people could not carry and we deposited it in the Central Bank of Nigeria (CBN) as evidence against him”.

“This nonsensical statement has remained in the public domain only because some people have suspended their sense of disbelief and condemned themselves to every hogwash that Ribadu invents in the attempt spruce himself up in borrowed plums”.

“It is on record that Ribadu has made at least five statements over this same claim, and no single one agreed with another. Also both Ibrahim Lamorde (the immediate past EFCC Chairman(and one James Garba, a CBN staff then seconded to the EFCC, made police statements which contradicted Ribadu’s. Even Senator Andy Uba said in a statement that EFCC collected the said money from his house’.

‘Nigerians should know that it was the money from Obasanjo’s Third Term Tenure elongation bid that was dressed up as a bribe just to demonize Ibori. Some five billion dollars were employed to bribe the national and state legislatures to support the accursed project, with certain individuals receiving from N50 to N200 million’.

“The attempt to shoot Ibori down began in 2003, when some PDP Governors were opposed to Obasanjo’s second term bid. That money, sourced from wherever, was used against Ibori, as part of that long-time ‘bring Ibori down project’ . We challenge any newspaper or magazine to check all the statements on this bribery allegation and see how each of them, including Ribadu’s five different statements, howls to Ribadu himself: “you are a damned liar”. We challenge the journalists to please hasten to prove us liars by looking into those statements”.

In this latest report, Ribadu told another damned lie:

“I arrested Ibori and prosecuted him. Since his friend was in power, they removed me, sent me to a school as a student where I was once a teacher”.