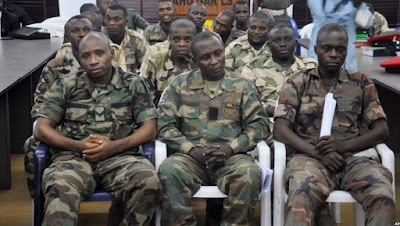 The 66 soldiers who were sentenced to death between March 2015 have had their sentences commuted to 10 years each in jail.The soldiers were charged and sentenced to death for mutiny and related offences in the fight against Boko Haram.A statement by the acting director, Army public rela­tions, Colonel Sani Usman, said the directive was car­ried out to examine the mer­it of each case, adding that

“it was on the basis of the review and recommenda­tions that the Chief of Army Staff commuted the death sentences of the 66 soldiers to ten years jail term”
Five of the soldiers put on trial for the alleged offences were discharged and acquitted of the charges while a soldier got 28 days’ imprisonment with hard labour.

The new sentences followed a directive by the Chief of Army Staff, Lt. Gen. Tukur Buratai, to review the verdicts. He added that the panel was still looking into the cases of other soldiers the outcome of which would be made known to the public on completion of the exercise.