Biafra: Court frees Nnamdi Kanu as DSS drops all charges against him 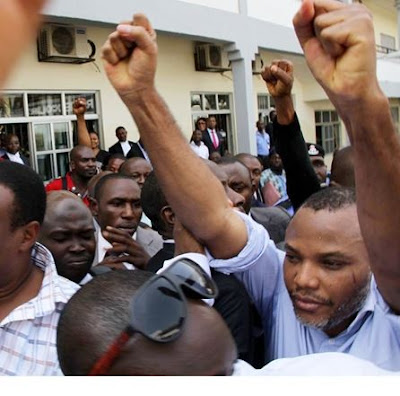 All charges against Director of Radio Biafra and Leader of the Indigenous People of Biafra (IPOB), Nnamdi Kanu,were on Wednesday discharged dropped .

After holding that the government had dropped the charges against Kanu, Magistrate of the Chief Magistrate Court, Wuse Zone 2, Abuja, Shuaibu Usman, ruled:

“The accused person is hereby discharged and the case struck out.”

The government through its agent, the Department of State Services (DSS), had elected to withdraw the case at the lower court for a higher court, which has jurisdiction to entertain charges bordering on terrorism, to take over.

The DSS has held Kanu for at least 90 days despite an order of the magistrate court granting him bail in October.