CAF U-23: Nigerian Fans Thrown Out Of Stadium For Displaying Biafra Flags 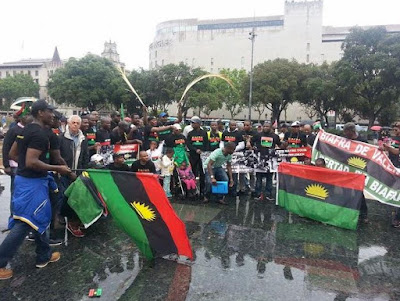 A number of Nigerian football fans were reportedly evicted for displaying the Biafran flag at the 2015 U-23 African Cup of Nations holding in Senegal.

According to reports, the fans had displayed the flag at the Leopold Sedar Senghor stadium in Dakar, the country’s capital, during the football match between Nigeria and Algeria.
The Senegalese authorities, however, took the display of the flags as a “militant act. and the Vice President of the Senegalese Football Federation, FSF, Amadou Kane, is said to have authoritatively ordered that the flags and all their banners be torn down, and the supporters involved be expelled from the stadium.