Kylie Jenner Only With Tyga To Spite Blac Chyna 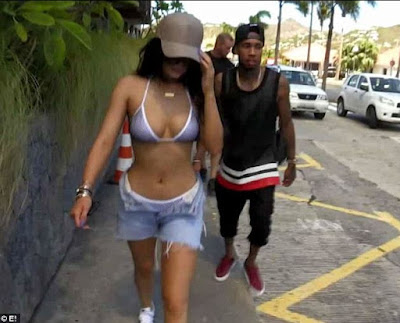 Kylie Jenner took Tyga back to spite Blac Chyna .A new report by Radaronline claims.An insider exclusively revealed to RadarOnline.com that the main reason the 18-year-old reality star can’t let her bad news boyfriend go once and for all is because he’s been “crying on the shoulder” of his baby mama, Blac Chyna.

“Kylie’s so immature, she has this ridiculous ego and can’t take the thought of Blac getting Tyga to herself again,”
As Radar reported, 28-year-old Chyna rubbed Jenner’s short-lived breakup with Tyga, 26, in her face when she posted a video online showing a watch he bought her. Kylie determined to prove she can have him at will,took him back.

“Blac’s taunts are what persuaded Kylie to have these peace talks, so she could prove to herself and Blac that Tyga’s more interested in her,” revealed the source.