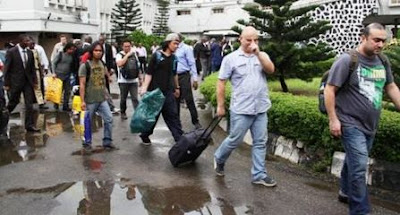 The Economic and Financial Crimes Commission (EFCC) had dragged the 9 foreigners before the court alleging that on or about March 27, 2015 in Lagos they conspired to commit an offence involving dealing in 3423.097metric tons of crude oil without lawful authority or appropriate license, contrary to Section 1(19)(6) of the Miscellaneous Offence Act, Cap M17.‎


The antigraft agency also alleged that the accused on the same day and time, stored 3,423. 097 metric tons of crude oil in MT Asteris' cargo tanks, and thereby committed an offence contrary to Section 4 of the Petroleum Act of the Federation of Nigeria 2004. The presiding judge, Justice Ibrahim Buba, in his ruling, found them guilty of the crime despite them stating that they were not guilty. Justice Buba granted them bail in the sum of N50 million each, with one surety who must be a Nigerian, provide evidence of means, and deposit his passport with the registrar of the court. ‎

He also ordered their vessel, MT Asteri, to be forfeited to the Federal Government of Nigeria, together with the crude oil on board. ‎ He described the convicted foreigners as the saboteurs who have turned Nigeria into the laughing stock in the comity of Nations, warning that Nigerians and non-Nigerians must respect Nigeria and its laws.