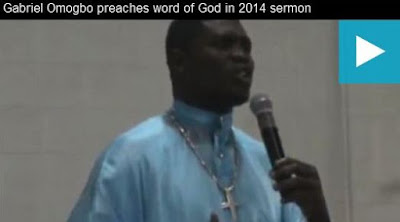 A preacher in the Celestial Church of Christ In Riverdale, USA has been arrested after being accused of beating, robbing and raping escorts in hotels across Washington DC.

Gabriel Omogbo of Hyattsville, Maryland, is charged with attempted first degree murder, armed robbery, first degree assault and reckless endangerment.
Police believe that the 33-year-old used the website Backpage.com to find female escorts and arranged to meet up with them.

According to WJLA, the first two attacks happened at the Best Western Plus Hotel in Rockville and on both occasions he is accused of raping and stealing from two women he had met online.

A third attack took place at the Radison Hotel in Rockville, where he is accused of threatening a woman with a knife.

He ordered the woman to take off her clothes before reportedly telling her 'You are going to die today.'
He then beat her, cutting her arms, legs and hands and stole her iPad, cell phone and $300.

The woman survived and told police that before he fled the hotel room offered her a glass of water.

He was arrested after police traced CCTV footage from the hotels as well as collecting DNA evidence from each of the rooms.

Omogbo is now being held at Montgomery County Correction Facility on a no bond status. He will next appear in Court on January 8 and could face life in prison.

According to his Facebook page, he preaches at the Celestial Church of Christ in Riverdale and is a former student at Bowie State University.

He also works as a security guard and currently lives at home with his parents.