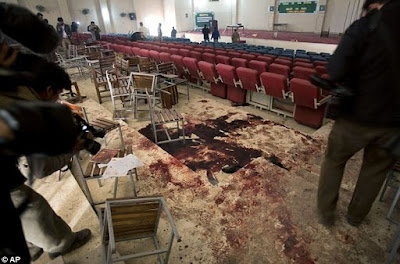 Pakistan today executed four men linked to the Taliban massacre of 130 pupils at a school in December, with parents of victims saying they deserved 'no forgiveness' for their actions.

According to AFP,the executions, carried out by hanging at a prison in the city of KohatSurvivors of the assault, in which the majority of the more than 150 victims were children, said they were 'happy' to hear of the executions, with one father saying the hangings should have been carried out in public squares rather than behind prison doors.The attack was Pakistan's deadliest and shocked a country already scarred by nearly a decade of extremism.
An official at the prison said the men who were hanged on Wednesday had held a final meeting with their families last nightA police official said their bodies would be handed over to relatives.