Policeman kills twin brothers,friend and himself in Lagos [PHOTOS] 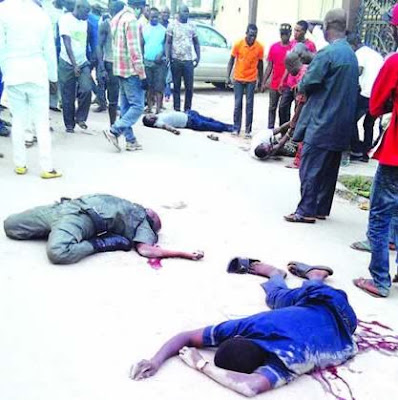 A drunk policeman, Stephen James, on Saturday shot dead three male customers at a hotel in the Ketu area of Lagos State.

According to SUNDAY PUNCH, among the deceased were twin brothers identified as Taiwo and Kehinde Oyesunle and their friend known simply as Jeje. The twins were the only children of their mother.

The tragic incident; which happened outside the premises of Paulson Hotel on Anibaba Street around 4:20pm, threw the entire neighbourhood and its environs into chaos with passers-by and residents scampering in different directions.
According to eyewitnesses, trouble started when the police sergeant with Force number 217884, threatened to shoot customers if they failed to buy him an alcoholic drink. The policeman, who was said to be a habitual smoker of marijuana, however, felt offended after the victims – Taiwo, Kehinde and Jeje – cautioned him to comport himself as an adult and a responsible policeman.

The eyewitnesses said the policeman ambushed and killed the three young men, who were in their early 30s, as they stepped outside the hotel premises where they had gone to celebrate Jeje’s birthday.

When the gravity of his act dawned on him, the policeman reportedly shot himself in the chest.

A guest at the hotel, who witnessed the killings, told SUNDAY PUNCH that the policeman had boasted about wanting to kill people hours before the incident happened.

The customer, who identified himself only as Femi, said all efforts to pacify the policeman proved abortive as he kept fomenting trouble and harassing visitors with his gun all afternoon.

“I was in the bar when the policeman first came in and threatened to shoot customers if they failed to buy him drinks. He boasted that he felt like killing someone today, but other customers and I pleaded with him.

“When the three guys walked in and sat, he went to them and threatened them too. But the guys told him to calm down that they would take care of him but he should comport himself as a responsible police officer.

“Nobody knew he took offence with their statement. The police officer shot the three guys one after the other as they stepped outside the hotel before killing himself. The whole thing happened like a movie,” he said.

Another resident Ladipo Idowu told our correspondents that the policeman was known to foment trouble in the area.

He said James usually fired his gun indiscriminately and the residents had warned the hotel authorities to caution him but nothing was done about it.

Another eyewitness, Dada Salawu, said, he was passing by when he saw the policeman and the three friends exchanging words. He said hardly had he left the area when the policeman opened fire on the victims.

A former girlfriend to one of the slain twins told SUNDAY PUNCH that they were the only children of their parents.

The lady, who was inconsolable as she spoke to one of our correspondents, said the twins were still mourning the death of their father who passed away in June 2014 when their lives were cut short.

Refusing to have her picture taken, she said,

“I called them very early on Saturday morning not to go outside their compound after I dreamt of seeing blood. I called them again at about 2:00pm to warn them. The twins, however, decided to drive a vehicle a relation had just bought at about 3:00pm. They drove to Paulson Hotel.”

The Sports Utility Vehicle which the victims drove was still parked in front of the hotel by the time our correspondents left the scene.

An angry mob, which later gathered at the scene of the tragedy, attempted to burn down the hotel and destroy properties within its premises.

As irate youths threw bottles and stones at the hotel, lodgers ran out of their rooms with their luggage and fled the scene. As at the time of filing this report, the hotel had been completely deserted by staff and guests.

The youths also wanted to burn the corpse of the policeman, but policemen, who later got to the scene pleaded with them.

Policemen led by the Divisional Police Officer of the Ketu Police Station arrived at the scene at about 5.30 pm to carry the corpses away.

The Police Public Relations Officer, Mr. Joe Offor, confirmed the killings to our correspondents on the telephone. However, he said he had not yet received the full details of the incident. 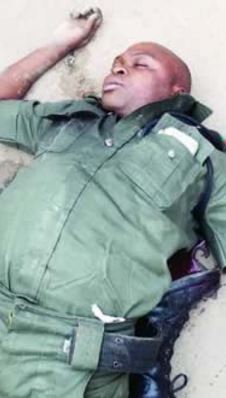 “The policeman was on duty at that hotel. He was attached to Mopol 22, Ikeja. He was drunk while on duty and he acted under the influence of alcohol.”

Efforts to speak with the management of the hotel on the incident proved abortive as it was deserted as of 6.30pm when one of our correspondents left the scene.

When one of our correspondents visited the home of the twins at No. 3, Dairo Street, Ketu, a sea of sympathisers were gathered, while friends of the victims vowed to revenge the killing. The entire neighbourhood was in tension with nearby hotels, drinking joints and shops closing for business earlier than usual.