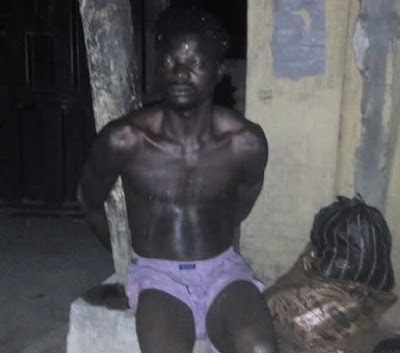 The police in Lagos have arrested a suspected robber, Saliu John, on the Old Apapa Road, Oyingbo, after allegedly dispossessing some market women of about N28,000.

John, who was said to have come to the area with two others, was nabbed by members of a vigilance group after he reportedly missed his way after the operation.

When the suspect was, however, searched, the vigilance group members were said to have found different purses containing money, arousing the suspicion of the security men that John allegedly attacked some market women.

A member of the vigilance service executive, identified only as Musibau, told PUNCH Metro that John’s three-man gang usually came from the Ijora area to rob on Jones, Atitebi and neighbouring streets on the Old Apapa Road.

Musibau added that when John could not account for the cash found on him, the security men knew he was a robber.

“It was at about 8.30pm on Monday. The robber was hiding behind a tanker parked by the roadside. It was a security man at a hotel nearby who noticed the stranded robber and alerted the vigilance group.

“When we searched him, we found purses containing sums of N1,500, N3,000, N2,500 among others, which added up to around N28,000. He could not give account of where he got the purses. He initially lied that he was coming from the Ijora area to do business and he had missed his way.

“Later, he confessed to robbery, and we held him until the morning when policemen from Iponri came to take him away. The hoodlums have a culture of robbing women who are returning from markets in the evening. They would attack them with broken bottles and clubs and collect their day’s sales.

“We learnt that the suspect came with two others who had escaped, but he got separated from them and was left behind. We did not find any weapon on John. But he came from the Ijora Badia, Apapa area.”

A resident, identified only as Kareem, said the gang also stole the batteries of two cars parked on Atitebi Street.

One of the car owners, who declined to be named, told our correspondent that he wanted to warm his car when he discovered that the hoodlums had removed the battery.

“When I opened the bonnet, I did not see the battery. As I searched for it, I was told that some robbers had struck on the neighbouring street, and one of them was caught. But it is their custom to sneak into our street and remove car batteries. I have yet to see the battery.”

Our correspondent learnt that the vigilance group and the police were making efforts to track the two other suspected robbers.