Home Gossip News Technically, we have won the war against Boko Haram - Buhari

Technically, we have won the war against Boko Haram - Buhari 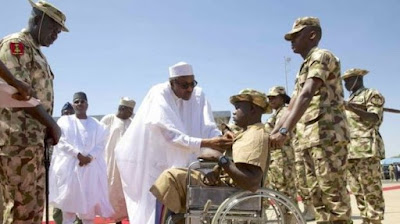 Following his vow to crush Boko Haram by the end of December 2015,President Muhammadu Buhari has told the BBC the Nigerian military is close to completely defeating the Islamist militants.

He said the militants could no longer mount conventional attacks against security forces or population centres.

"I think, technically, we have won the war,"The jihadists have been forced to cut back on suicide bombings as a result of the military action against them, President Buhari said.

"Boko Haram has reverted to using improvised explosive devices (IEDs),""They have now been reduced to that.""Boko Haram is an organised fighting force, I assure you, [but] we have dealt with them."

But the BBC's Bashir Sa'ad Abdullahi in the capital, Abuja, says that the deadline is likely to be extended as Boko Haram is still bombing areas despite losing towns under its control.