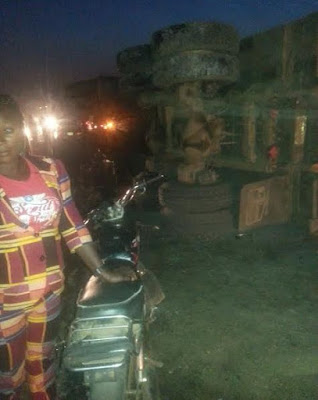 Residents of Dutse Bukuma, Bwari Area Council in the Federal Capital Territory are currently reeling in a state of disbelief following the alleged disappearance of a tipper driver from the scene of an accident.

DAILY POST gathered that a tipper loaded with sand and with registration number Abuja RBC 339XB was coming from Bwari axis, heading towards Dutsi Alhaji, when its engine suddenly fell off the hood, around tipper garage close to Dutse Bukuma.

The tipper consequently failed break and the driver lost control and rammed into a barricade before it finally somersaulted.

It was learnt that residents who rushed to the scene of the accident found a mechanic identified as Tunde Bello trapped inside the tipper but the driver was nowhere to be found as he was alleged to have disappeared at the instance of the accident.

The incident which happened last Friday at about 7.45pm caused a major gridlock around the Bwari expressway, leaving motorists stranded for hours.

Speaking with DAILY POST correspondent, Bello said prior to the accident, he had worked on the tipper and they were going for a test drive when the incident happened.
He further added that at the instance of the accident, the driver disappeared.

Bello said, “I had earlier worked on the engine of the tipper which was carrying sand in my shop. when I finished, I accompanied the driver, around Dutse Bokoma, the tipper suddenly failed break and ran into the side walk before somersaulting.

“It was later we realised that the engine of the tipper had pulled off from the hood but what really surprised me was the fact that somebody I was sitting next to, the moment the accident happened could not be seen.”
“People who rushed to help thought I was the driver but when I started asking after the driver everybody became surprised. They looked everywhere but he could not be found.”

Bello further added, “I do watch this thing in movies but today I witnessed it myself, this life is a mystery.”

However police officers from the Bwari Police Station were seen at the scene of the accident trying to clear and direct traffic in the area.

An officer simply identified as Ojonemi who spoke with DAILY POST said, “It is still a mystery to me. immediately the accident happened, we all rushed to the scene to see if I could rescue the occupant of the tipper but funny enough, the driver of the tipper was nowhere to be found. It is believed that he disappeared. That’s what most of them do.”