Home Gossip News Who released, killed and ate our lion? By Reuben Abati

Who released, killed and ate our lion? By Reuben Abati 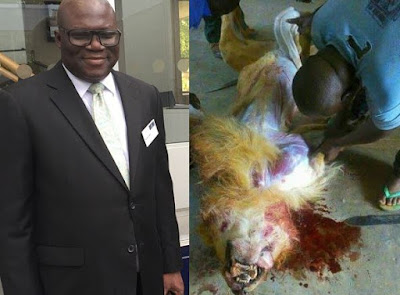 The former special adviser on media and publicity pens yet another interesting satirical article,read below

“Did they send you your own share of the bush meat?”

“Bush meat?”
“The lion in the zoo that became bush meat in Jos”
“What’s my own inside? I don’t know any zoo worker in Jos and how could a lion that was allowed out of its cage and got shot end up in my stomach. The kind of things you say sometimes.”
“That means you have not been following the story.”
“It is an animal tale”
“Created, concocted and delivered by animals in human skin, working in animal kingdom, telling us animal tales. What surprises me is the fact that there has been no public uproar, no outrage.”
“People are too busy thinking of how to survive as human beings, how to fight the current nationwide epidemic of empty pockets and stomachs, and survive the change in their lives.”

“But when a similar incident occurred at the Hwange National Park in Zimbabwe, there was serious outrage all over the world. Dr. Palmer, the American who killed the lion was the target of abuse and attacks. He even had to shut down his dental office. There were calls for his prosecution.”
“I know. In our case, the international community is indifferent. It is as if nothing has happened. A lion was killed in Zimbabwe; there was protest. A few days ago in Kenya, two Maasai herdsmen were charged for poisoning a lion. A lion is killed in Nigeria, not a whimper. “
“The truth is that the rest of the world is convinced that Nigeria itself is a zoo. Boko Haram is slaughtering thousands of human beings, girls are being abducted in hundreds, women are being raped, voters are getting killed in Kogi and Bayelsa. With such evils against humanity, why should anyone worry about a Nigerian lion being shot and ending up in the zoo of stomachs?”
“The zoo of stomachs”
“Look, I can swear that if you open some people’s stomachs in this country, what you will find is a zoo: lions, grasshoppers, horses, cats, rats, snakes, dogs, rabbits, antelopes, crocodiles, birds, elephants, extinct animals, disappearing species, anything that can serve the gut, and ginger the taste buds. That is why we can never successfully run a zoo, or a Games Reserve.”
“See, the situation in Zimbabwe with Cecil, the lion is no different. In Zimbabwe, the zoo guides deliberately released the lion and Dr. Palmer laid siege and gunned down the lion, and beheaded it. In Jos, their explanation is that the lion slipped out of its cage when it was being fed breakfast.”
“Lying liars. Fibbing fibbers.”
“They made it sound as if the lion was living in a room and parlour and he just moved from the room to the parlour, to the verandah and to the streets.  It is a zoo, for Heaven’s sake and there are standards and best practices!.”
“How will they know what the best practice is, when they don’t even know the age of the lion? The manager of the zoo says the lion has been there since 1972. A 43-year old lion, and yet there is no established protocol for managing it.”
“There is no 43-year old lion anywhere in the world. That is a lie. They don’t have records. They don’t keep records.”

“The lion doesn’t even have a name. In Zimbabwe, and Kenya, they name their lions.”
“That is not a problem. We can give the lion a name, right now. What is the name of the state Governor?”
“Simon Lalong.  What about him?”
“Good.  Simon, the lion. How about that?”
“Ha. The man is still alive oh. And of what use is a name to a lion that is dead, skinned, cut into bits and pieces, taken home to the cooking pots, eaten, digested, and washed down with whatever the animals eating animal meat deemed fit.”

“The very reason the Governor should order a serious investigation. Who released the lion? And why? Who killed it, skinned it? And who took part in the Feast of the Lion? For all you know, the zoo-keeper deliberately released the lion. He may have been commissioned to do so, by herbalists, who I hear value the body parts of a lion. In that kind of world, the teeth of a lion, the paws, the skin, the ears, all of this can be used by ritualists to give a human being, lion-like powers.”
“Blood of Jesus!”
“Did you not see how the killers posed with the lion for photograph, drooling from the mouth, salivating, looking hungry?
“They made it seem as if the lion was a jailbird who escaped, and resisting arrest, they shot it, instead of tranquilizing it. And they turned the zoo into an abattoir!”
“All the characters involved should be investigated and sacked. Otherwise, tomorrow, they will release a rabbit and gun it down, next tomorrow, an antelope will also break jail, and it will be shot, to be followed by a snake, all getting shot and ending up in people’s pots as bush meat.”
“That is why we can’t run a proper zoo, games reserve or a tourism programme. We talk about climate change and the environment but we don’t know that animals are important to the ecosystem. Sad.”
“Have you not heard of the lion that the Saraki Senate has also let loose?”
“A zoo in the Senate? I don’t get it.”
“They have just released one lion called Social Media Bill.”
“You mean the Frivolous Petitions Prohibition Bill”
“The law seeks to gag the social media. It says you can’t even complain on your what’s app, email, twitter, BB or blog and if you say something that is frivolous, you can go to jail or pay a fine.”
“That is an assault on the fundamental right to free speech; a dangerous lion that should be tranquilized!”
“They don’t have tranquilizer in Jos zoo or any other zoo in Nigeria, is it in the Senate that they will have it? Look, some activists have decided to organize their own public hearings and shoot down this particular lion.”
“Let’s go there then. Let the shooting shooters, the gunning gunners, the writing writers, the protesting protesters, the marching marchers, the shouting shouters, the fighting fighters, the petitioning petitioners, the blogging bloggers and the tweeting children of anger have their own public hearing. That’s democracy.”
“You left out the Wailing Wailers”
“They too. I think this is the type of lion that Nigerians should kill, not Simon.”
“I like your passion. But there was a protest in Abuja on Tuesday. I didn’t see you joining them?”
“Hen. Hen. You want them to mistake me for a lion that escaped and shoot me, abi? You don’t know that to be an activist, you must also be wise, and protect your stomach from bullets.”
“I thought you were bullet-proof. And you need not be afraid, anyway. The Senate has made it clear that it is acting in the public interest and that its members are not opposed to free speech. Just a simple matter.”
“Please! My fear is that they are all shooting already and because they are yet to hit target, there are stray bullets flying all around, respecting nobody. You go and ask Dino.”
“Which of the Dinos? Dino 1, Dino 2, Dino 3 or Dino $1,000?”
“I don’t know. But the people in Aso Rock have been smart enough to duck.  They are now talking about free speech. Free speech. Free speech! Thank God oh, for free speech!”
“Not in Bayelsa at this time, though. Or in Kogi, where people are suspicious of tomorrow.”
“Why not in Bayelsa? I saw the people insisting that they should be allowed to choose  their Governor. Too much violence in that election.”
“I hear Countriman has declared that he’s not going to die and that the election will be concluded.”
“Who is so-called?”
“Dickson”
“Ha, Dickson na Ijebu Ode boy oh. Him no ready to die. Bobo no go die, afi to ba di Governor. Bobo!”
“But INEC says the Bayelsa election is inconclusive.”
“This new INEC should just be renamed Inconclusive National Electoral Commission (INEC). If they take weeks to conduct elections in eight local governments, with less than one million voters, if they have to run a nationwide election, then the entire country will be declared inconclusive. Where is Jega by the way? They need him as a Consultant.”
“Why? Let him enjoy his retirement, I beg.”
“Why not?”
“It is called change, my brother.”
“But not in Kogi where I hear the Deputy-Governor elect is swearing that if he is not allowed to inherit the Audu-Faleke undeclared victory, he will not show up to be sworn in as a Deputy Governor on January 27, 2016.”
“He doesn’t want to be Deputy Governor again?”
“He says he cannot betray former Governor Abubakar Audu.”
“Ha. Inconclusive matter! I think we should declare 2015 our year of inconclusiveness. 2015: Nigeria’s Inconclusive Year. How about that?

“Nigeria’s Year of Inconclusivity.”
“Two weeks to Christmas, see how people are looking sad. Some people this year will just pretend that there is no Christmas, Christmas having been declared inconclusive! Even prostitutes have reduced their charging rates; everybody is looking for survival, and anything is fair game, be it a live lion, or the people’s rights or what is that famous blogger’s favourite word again? Yes, eggplant. As Douglas Adams said: to summarize the summary of a summary, people are a problem.”
“Tell me more about these prostitutes and their current rate cards.”
“No be me and you.  You go and find out. You see, you are part of the problem.”
“That includes you too, I beg. You always talk about change; now you have it, and you don’t want to talk about it. My friend, don’t complain. Go and sit down.”
“Change?”
“Change is the necessity of history”
“You know the truth?”
“What?”
“Things do not change, we do.”  Henry David Thoreau.”
“I don’t know him. You know what? Stop quoting dead people.”