Woman 'photobombed by alien' during selfie on plane [PHOTO] 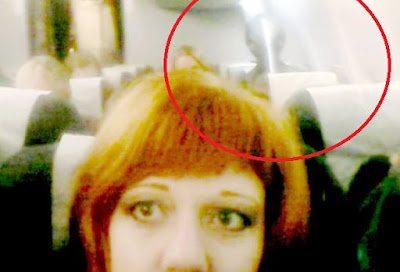 A woman has posted a selfie taken on a plane in which she claims she was photobombed - by an alien.

Olesya Podkorytov from  Russia said she took the picture during the flight on a whim but when she posted it on social media friends pointed out something strange a few seats behind.

The young woman was on a business trip and said she was not sure why she suddenly decided to take a selfie as she said it is not usually something she would do,UK Mirror reports .

She said when she shared the snap online that she was flooded with comments alerting her to the "alien".

"I uploaded the picture on my social media page, and then all the questions and comments hit me.Only after that I realised there was a bizarre-looking image of a creature behind me."
She said the figure was "humanoid" and looked like a large alien similar to those in Hollywood films.Some people suggested it is was not an alien - but a ghost.