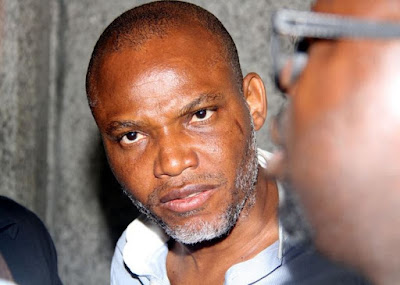 Niger Delta ex-militant leaders in support of the Indigenous People of Biafra (IPOB) struggle have given Federal Government 31-day deadline to free the leader of the group and Director of Radio Biafra, Nnamdi Kanu, or face the consequences.

Also, the former warlords warned security agencies against tampering with the life of the IPOB leader, who is detained at Kuje Prison. Spokesperson of the concerned ex-militants, simply identified as General Ben, warned that at the expiration of the ultimatum, they would resume massive abduction of expatriates as a first step.
The spokesperson declared that Federal Government should not underrate the activities of the militants in the Niger Delta, no matter the number of soldiers deployed against them. He fumed:

“The ex-militant leaders in Ebeocha IPOB are warning the Federal Government and are giving them 31 days to release Nnamdi Kanu, the leader of IPOB and Director of Radio Biafra.

“We are giving Federal Government deadline; if they fail to release him, the country would be vandalised. He is fighting a just cause. Nothing should happen to him and Federal Government should not forget what we can do,” he threatened.

They accused the Federal Government of marginalising a section of the country, pointing out that the approach of the Presidency on issues bordering on the entire geo-political zones were treated unjustly and with bias.

Speaking on the recent invasion of the homes of their colleagues by security operatives, General Ben said the action was meant to intimidate them.

“Federal Government wants to use that way to harm us. But we are warning that they (FG) should not forget our capabilities. They think we can be intimidated by that approach. No way!

“Federal Government should know that the detention of Nnamdi Kanu and raid of the residences of our colleagues are enough reasons to collapse the society.”

“It is sad. We are not happy because things are not working the right way in the country. We are marginalised and hunted. We are saying ‘enough is enough’. We are no longer interested in this country again,” he declared.