Father explains why he fled as 5 teens raped his daughter 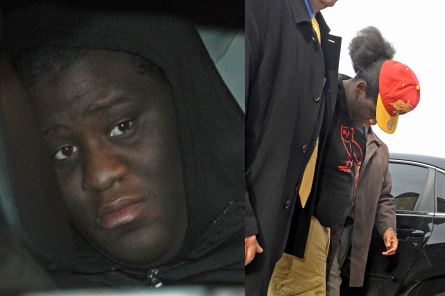 The dad of a teenage girl who was gang raped in a New York park said he had no choice but to run away when his daughter was attacked.The unidentified man told how the thugs put a gun in his face and ordered him to leave the playground on Thursday night.

After he fled his 18-year-old daughter was raped in a playground area in the run-down Brownsville part of Brooklyn.He said he felt the gang would kill him if he stayed and tried to fight.

Speaking to ABC news, he said:

"The one put a gun in my face telling me to run, and all of them had their way with her."

As he did not have a phone, he ran to some nearby shops to ask for help but says they refused.

A shop worker in the Zaida Grocery store, Brooklyn, told how the dad ran to stores nearby to try to call the police, but no one could understand him.

"He was swaying side to side. He asked me, ‘Lend me your phone.’ I said no.

"He didn’t tell me it was an emergency or I need to call the police, or of course I would’ve given it to him or just called the police for him."

Five teenage boys have since been arrested after the horrifying attack .The youngest of those taken into custody over the attack is just 14 years old.

Four of the teens , who range in age from 14 to 17, were charged with a single count each of rape and sex abuse and two counts of participating in a criminal sex act, police said.

However, the boys claim it was consensual and they met the father and daughter having sex and asked if they could have some..She agreed..One of the boys recorded a short clip on his phone..

In a short clip of the footage viewed by The Post, a young woman can be seen sitting on the ground rocking back and forth and grinning. There is the sound of young men laughing in the background.

One of the teens says to the older man, “Can we have some of that?” according to a law-enforcement source.

A teen can then be heard telling the girl,

The drunken dad staggered off and, when he returned, threw a beer bottle at the teens, according to law-enforcement sources.

The father told cops he fled the rape scene because one of the teens had a gun. A weapon has yet to be recovered.

Phillip’s brother, Billy Anderson, 24, and mother say the video shows that the boys’ sex with the girl was consensual and that the victim and her dad made up the rape tale to cover up their actions.

“All of that she said is a lie. If that was supposed to be her father, then you know she was in the park f–king her father,” Anderson said. “She was basically telling them, ‘You could do it.’ This video is basically proving that whatever [their] story is, it’s false.”

Phillip’s mom, who would not give her name, added,

“She was laughing, and they walked up on her like that. That’s her! She don’t have on no pants. This is before everything. She was out there having sex with the man that say he was her father. She caused all this chaos for no reason. And it’s not fair.”

US Representative Hakeem Jeffries said the young woman and her father had recently reconnected after a troubled past..