I shed tears over the unbelievable amount of money stolen - EFCC boss, Magu 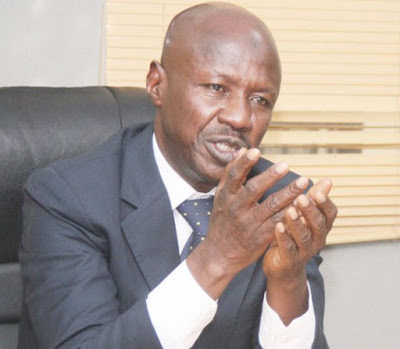 “From all indications, the judges are more serious, everybody is cooperating and this year, we will see more politically-exposed persons convicted. We will flush out corrupt people.”
“The impunity is too much. Sometimes I shed tears in the morning before I go to the office. It is just unbelievable; the rot is terrible. What I am saying is that people who know they have stolen our commonwealth should bring it back,”

“People arrogate things to themselves. They have taken our money and are bold enough to say they are not going to return it. The money belongs to the people; they should return the money quietly; let there be voluntary compliance. Let them voluntarily come out to say ‘this is what I have stolen’ and the government will take it. I think that is the best thing to do.”

On the handcuffing of Peoples Democratic Party (PDP) spokesperson Olisa Metuh when he appeared in court, saying, there is nothing wrong in handcuffing an accused.

“It is not coming from us(Nigerian Prisons Service —NPS— brought Metuh to court), but there is nothing wrong with that actually. They have a right to use their discretion; you are not there, there must be reason. There are instances when you handcuff a suspect, but let them explain themselves.”