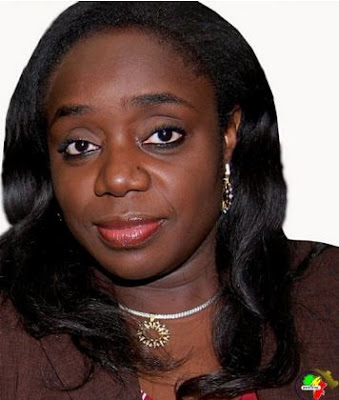 A civil society organisation, Rescue Nigerian Economy Project has called on President Muhammadu Buhari to as a matter of urgency redeploy Nigeria’s Finance Minister, Kemi Adeosun to another Ministry in order to save Nigeria’s economy from going into recession according to Daily Independent.

In a statement made available to Daily Independent on Tuesday, its Executive Secretary, Dennis Alamu- George said Adeosun’s handling of the Finance Ministry since her appointment has proven that she is a rookie who is not qualified to proffer solutions to the myriads of problems confronting Nigeria’s economy.

While also calling on Adeosun to resign honourably if she finds the task too daunting, the group said the minister"through her inactions in the past few weeks has confirmed the verdict by the Economist that she is poorly qualified to be Nigeria’s Finance Minister”.

“President Buhari does not know Kemi Adeosun from Adam. She was recommended to her by the incumbent governor of Ogun state under which she has served as Commissioner for Finance. From her performance so far, the Minister has proven that the management of Nigeria’s economy is a different ball game when compared to that of Ogun state”.

“While there is lack of economic direction from the federal government, the Minister has not come up with any concrete plan aimed at salvaging Nigeria’s economy, which is in a state of coma. Foreign investors are leaving in droves while millions of Nigerians have had their money stuck in the capital market”.

“If Nigerians can criticise the contents of the 2016 budget and President Buhari has written to the National Assembly seeking its withdrawal, he should also realise the mistake he has made in the appointment of Mrs Adeosun and redeploy her to another ministry as a matter of urgency”.

“If there is any ministry that requires a thoroghbred professional with vast experience, it is the Ministry of Finance. It is not a ministry that anybody should experiment with, especially now that we are grappling with sharp decline in oil prices.Competence should take priority over political affiliations” the group said.