Man beats wife to death over adultery in Ebonyi 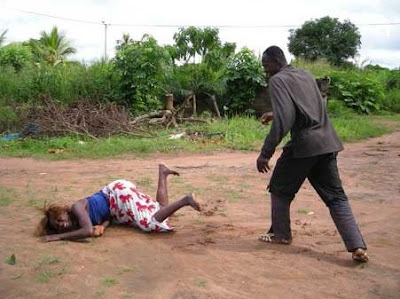 A husband beat his wife to death over allegations of adultery.The sad incident happened in Ndubia Inyimaegu community in Izzi Local Government Area of Ebonyi State.

Police Public Relations Officer of the state command, ASP George Okafor, revealed that the suspect had angrily beaten his wife to stupor when the deceased stopped him from chasing after her alleged lover boy. The Lagos-based James Uguru was said to have become suspicious of the wife’s,Jacinta's  alleged promiscuity following rumours making the rounds on the matter in the community whenever he visits home to see his family. …


It was learned that trouble started when the couple was discussing in the sitting room and suddenly a phone started ringing in their bedroom. As the husband made to go for the phone, his wife held his waist, preventing him from moving.

Vanguard gathered that as he was being prevented from entering the bedroom, the wife’s alleged lover ran out from their bedroom. His wife’s insistence that he should not chase after the man made him vent his anger on her. A source said:

“He started punching the woman, who eventually collapsed and was rushed to the hospital where she was confirmed dead.”

Vanguard further gathered that the suspect, while in Lagos, had been suspecting the wife of having an extra-marital affair with the said lover before the ugly episode. According the police spokesman, the suspect has been arrested as efforts were on to arrest the said lover boy.