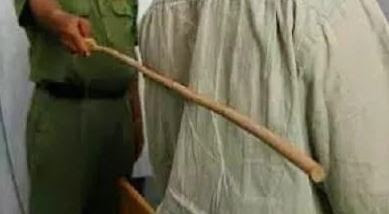 A Gudu Upper Area Court in Abuja on Thursday, sentenced Mr John Okeke to six weeks imprisonment for stealing two cell telephones. The judge, Alhaji Umar Kagarko, gave an option of fine in the sum of N8, 000 and ordered that the convict should be given six strokes of cane. Kagarko advised him to desist from criminal activities. Okeke of Area 1, Garki, Abuja, was arraigned on a three-count charge of criminal conspiracy, criminal trespass and theft.

Vanguard reports that, the Prosecutor, Kufreabasi Ebong, had told the court that one Friday Ahmed of Wumba Village, Abuja, reported the matter at the Apo Police Station on May 27, 2016.
He said Okeke conspired with one Onye, who is at large, and criminally trespassed into Ahmed’s room and stole one Nokia telephone and one Itel telephone valued at N10, 000 and N7, 000, respectively. Ebong said that the telephones were recovered from Okeke during police investigations. He said the offence contravened Sections 97, 348 and 288 of the Penal Code. Okeke pleaded guilty and begged for leniency.