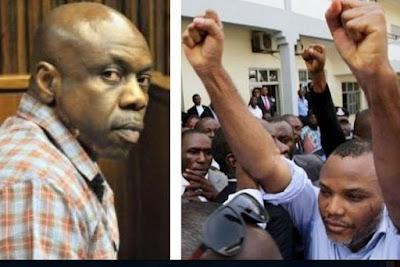 
MEND in a statement by spokesperson, Jomo Gbomo, on Saturday announced other breakthroughs in the discussions that will end the revolt in the South-South and South East regions in a jiffy.

However, it said the recalcitrant Niger Delta Avengers, NDA, still has opportunity to embrace peace failing which a combination of military forces and volunteers in the region, would smoke them out.

The statement read: “The Movement for the Emancipation of the Niger Delta (MEND) is the only militant group from the Niger Delta region who are presently engaged in a dialogue with the Federal Government of Nigeria – through oil companies and security agencies -with a view to resolving the current Niger Delta crisis.”

“Thus far, the deliberations have been fruitful, various concessions and guarantees have already been secured. Some of which include, but are not limited to: Release of Henry Okah, Charles Okah and Obi Nwabueze; Review of the life sentence handed to Mr. Edmund Ebiware based on a proposal put forward by the Aaron Team representative for Abia and Imo states, Senator Adolphus Wabara.

“Also, conditional release of IPOB leader, Mr. Nnamdi Kanu and others if they renounce their agitation for a “Biafra Republic,” the group said.

Furthermore, MEND said they agreed: “That Mr. Government Ekpemupolo shall not be arrested, harassed and/or intimidated whenever he makes himself available as a delegate of the MEND Aaron Team.”

It added: “That international arbitrator and conflict negotiator, American Dr. Judith Asuni shall be accepted as the representative of the Niger Delta Avengers (NDA) on the MEND Aaron Team; that the criminal charges against Urhobo freedom fighter, Mr. Kelvin Prosper Oniarah shall be reviewed.

“However, one of the most immediate and urgent fallout of the ongoing dialogue is the imperative for the Federal Government and MEND to jointly and separately take proactive steps to rescue and secure the region. This is in the event that the recalcitrant Niger Delta Avengers (NDA) continuing on its senseless and politically-motivated path of attacks on the country’s oil assets,” it noted.