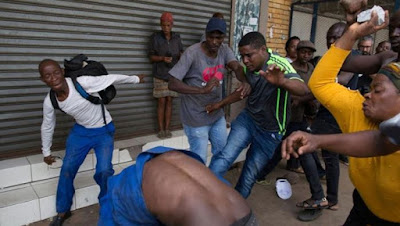 The 37-year-old politician said its main mandate was to do away with foreigners who threatened patriotic South Africans’ livelihoods.

"Their tuckshops, hair salons and businesses are crippling our people," Mr Khumalo said.Khumalo is explicit about his anti-foreign sentiments‚ blaming millions of foreign nationals in South Africa for the country's social and economic problems. He calls himself a nationalist, and said he was merely voicing what most South Africans were thinking and talking about behind closed doors.

“We are not xenophobic but we work in the interest of South Africans. It is about national identity and pride. There is no nationality called African. You are either South African‚ Angolan or Ethiopian. My (identity document) states that I am a South African‚ not African‚” he said.Khumalo‚ who grew up in the US‚ said according to his research‚ there were more than 13-million foreign nationals living in South Africa. He said there were more than 5-million Zimbabweans‚ 5.6-million Malawians and 3.2-million Nigerians in the country.

“Now add Mozambicans‚ Pakistanis‚ Congolese. It cannot be‚” he said.He said the presence of so many foreign nationals in South Africa was causing suffering and creating social and economic problems.

Khumalo said foreign nationals had jobs while locals were unemployed. Foreigners occupied flats in cities and hijacked buildings where they sold drugs and ran brothels.

“You cannot build a nation within a nation. Their businesses do not bank their proceeds. Where is the money going? It will fund terrorism. This is a Trojan Horse. South Africans will wake up one day to find men with assault rifles kidnapping girls on the streets. We have people here in SA who were child soldiers in their countries‚” he said.Khumalo said the recent spate of violence in Rosettenville in Johannesburg and Pretoria West‚ where people torched houses belonging to foreign nationals‚ was the result of local people not having representatives and not being listened to.

“We need to tackle this issue before the whole country burns‚” he said.Khumalo said his party would contest the upcoming national election. If it came to power it would give foreign nationals 48 hours to leave and then seal the borders. He said his party had more than 500 members of all races.

He said the party‚ in collaboration with Concerned Residents of Mamelodi‚ had organised the march to the Union Buildings in Pretoria on Friday to voice its anti-foreign national sentiment.
Marc Gbaffou‚ chairperson of the African Diaspora Forum‚ said few South Africans harboured hatred for migrants. Africans were welcoming to everyone by nature.

"That party will not succeed in this beautiful continent of ours. Most South Africans are welcoming to migrants. A party that talks of driving migrants out is dead before it is even founded‚"Source: Times LIVE