Many feared dead as Boko Haram engages army in battle 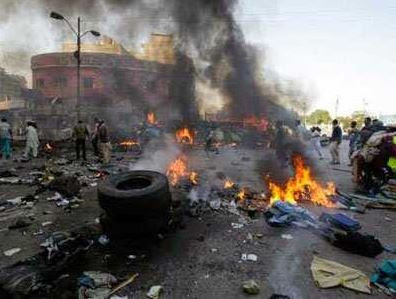 Dozens of boko haram members including innocent civilians were feared dead in a crossfire that ensued between military troops and terrorists, most of whom were suicide bombers who attempted to infiltrate Maiduguri, the Borno state capital. Sources have said.

The multiple incidents started at about 11:30pm on Thursday, when a female suicide bomber sneaked into a convoy of vehicles waiting for military escort to Gamboru Ngala on Friday morning, which later followed with sporadic exchange of gunfire and sound of explosions around Muna garrage general area of the metropolis.

Unconfirmed report also has it that six members of civilian JTF sustained critical injuries while attempting to repel the attacks. This incident is coming barely 24 hours when some group of terrorists attacked an Airforce helicopter conveying medical team to Gwoza, luckily the pilot of the il-fated aircraft escaped with one of the airman sustained critical injury. A member of Civilian JTF, Usman Ali in a telephone call last night said, “Boko Haram terrorists including suicide bombers tried to storm Maiduguri metropolitan but our gallant soldiers defeated them.

They tried to infiltrate the city through the newly constructed customs house where thousands of Internally Displaced Persons, IDPs from Ajiri and Anadua communities of Mafa local government area were camped.

“A privileged information indicated that most of the dreaded insurgents were killed by our gallant troops of ‘Operations Lafiya Dole’.

“However unspecified number of innocent people lost their lives, with others seriously injured”. Ali said. Residents of 505 Abba Hana Terab Housing estate which is located close to the scene, confirmed the attacks, pointing out that, most of them had to vacate the estate and hanged at the gate during the encounter, and after about an hour ago, they started seeing security agencies and ambulances conveying those affected from Muna garrage customs camp to hospitals. Details later.
Credit: VanguardNgr.com